Through Network75 I have developed great business acumen and experience that will form the foundations of my career. My experiences also helped me achieve a first class honours degree! 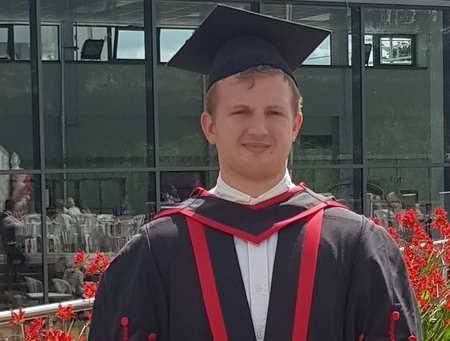 Jordan Thomas graduated with a First Class BA (Hons) Accounting & Finance degree in July 2017. During his time on the Network75 scheme Jordan was placed with GE Aviation Wales in Nantgarw; he has since been successful in gaining employment as a Tax Officer with HM Revenue & Customs (HMRC) in Llanishen.

Jordan’s Network75 journey started as a University of South Wales student undertaking an Internship at GE Aviation. Realising the potential Jordan had, GE contacted the scheme regarding the possibility of them becoming a host company for Jordan allowing him to join the Network75 scheme to complete the final year of his degree. Jordan spent the next two years balancing degree study with a demanding role. By working for such a prestigious company whilst on the Network75 scheme Jordan believes that he has developed great business acumen and experience that will form the foundations of his career; his experiences also helped in his achievement of a first class honours degree.

As part of his new role, Jordan is based within the Campaigns and Projects division of HMRC and deals with High Income Child Benefit Charge Cases. The main responsibilities of his role include carrying out quality compliance checks and establishing facts, engaging directly with customers, raising timely and accurate tax assessments, and working corporately across the business to maximise the performance and yield of HMRC. The nature of the role means he is in regular contact with customers. This provides him with variety as his work focus changes on a weekly basis.

Jordan’s advice to prospective Network75 students would be to seize the opportunity to join the scheme. He feels that the opportunity to study your chosen course along with the insight into a real business environment is invaluable. His experiences through the Network75 scheme have prepared him for his current management level role. He also believes he had an advantage over non-Network75 graduates as his industry relevant experience meant he had real working life examples to call upon when required to demonstrate his competencies during the application and interview process for HMRC. Jordan does not believe he would have secured a position of this level had he not been fortunate enough to be a part of the Network75 scheme.

Based on his experience, Jordan would like to see more companies utilising the talent that the University of South Wales has to offer; he believes the Network75 scheme is a great means of developing conscientious employees in a similar manner to an apprenticeship.