“Definitely go for it! I personally feel that this scheme is the best investment and decision that I have ever made, both academically and professionally. This scheme provides it all; 5 years of valuable work experience, a paid bursary and an undergraduate degree with NO STUDENT DEBT! What more could a student ask for? Having reflected on my experience on the Network75 scheme, I wouldn’t change a thing. Knowing that I was being supported and challenged to achieve my goals in the workplace, pushed me even harder to achieve over and above my potential when completing my university work”.

Emma Smart graduated with a First Class BA (Hons) Human Resource Management degree in July 2019. During her time on the Network75 scheme, Emma was placed with Monmouthshire Building Society in Newport, a financial institution based in South Wales that provides customers with savings and mortgage products.  During her final year of the Network75 scheme Emma won two awards at the Wales HR Network Awards organised by the Wales HR Network, a leading network for HR professionals in Wales.

“I was awarded the HR Apprentice/Assistant/Trainee of the Year award which recognises the person who has demonstrated excellence and the potential to become a future HR leader. The award looks to recognise the rising stars already making a difference within their organisation.  I am also the first recipient of the Rising HR Star award. This was a new award created by the judges for this years' awards ceremony in light of this years' exceptional young talent.

My Network75 Host Company, Monmouthshire Building Society nominated me in recognition of the work I have completed and the accomplishments that I have achieved during my time as a Network75 Human Resource Management Trainee.

I am still overwhelmed winning one award, let alone two! However, upon reflection, I know that this recognition shows that the work I have put in to both my host company and studying at university has paid off massively. Following these awards, I have also received multiple compliments/messages from HR professionals and individuals from other organisations (some of which whom hold senior HR roles) congratulating me on the awards that I have won. Not only am I thankful for these messages but knowing that my achievements have been recognised by others, it makes me extremely proud to know what I have accomplished and that these awards will have a positive impact on my career going forward within a HR environment".

Prior to graduating from the Network75 Scheme, Emma accepted full- time employment with Monmouthshire Building Society as a Human Resources & Learning and Development Associate.

Emma’s role involves carrying out an administrative function within the Society (such as dealing with colleague starter, transfer and leaver paperwork and processes), whilst providing support to the senior members of the HR team on various projects being implemented within the organisation.   During a ‘typical day’ Emma ensures that employee records are accurate and that the related HR administrative functions and processes are carried out promptly and correctly.  Her role also involves providing support to HR Advisors and internal customers with any HR administrative tasks that they require.  One of Emma’s main reasons for choosing a career in HR is that no day is the same!

Emma feels that through the Network75 scheme she has not only gained a degree, but also the industry experience required to progress along the career ladder where her goal is to one day become a HR Director. 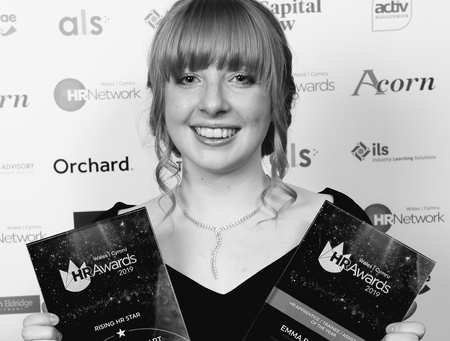 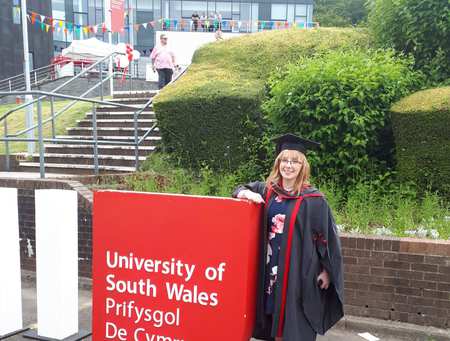 Inset: Emma at her Graduation