Overall, my involvement with the EBL project has been very beneficial and informative. I have benefited greatly from experiencing the practicalities of constructing a design project and hope to be able to apply the knowledge I have gained to my future work. 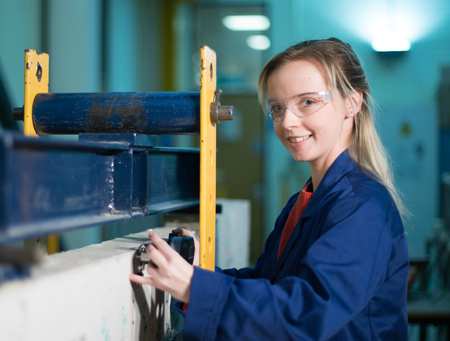 Abigail's host company delivers solutions, reduces costs, and enhances services for a wide range of clients including central and local government, property developers, investors, occupiers, building contractors and a range of other commercial organisations, and blue chip companies. They have worked in partnership with Network75 for a number of years to develop the next generation of Civil Engineers.

Abigail has given Network75 an overview of the project as well as her involvement, both on-site and office-based:

"The Eastern Bay Link Road (EBL) project aims to reduce traffic congestion on the existing highway network (using the existing 3km route along Ocean Way, East Tyndall Street and Central Link) in addition to increasing accessibility to Cardiff when travelling from the East. In order to do this, the project includes the construction of a 1km dual carriageway situated between Queens Gate Roundabout (to the West) and Ocean Way Roundabout to the East. The former industrial / brownfield site is bounded by Roath Dock to the South and a commercial / industrial area to the North.

"The proposed highway will travel over a 657m viaduct consisting of 3 main structures in its journey between the existing roundabouts. Support to the structures will include a combination of driven piles, large diameter bored piles and a reinforced concrete pile caps. A combination of both precast concrete beams and steel I-beams will be used to achieve the required spans between piers.

"Logistical constraints such as accommodating a live railway running through the site (which also passes beneath the structure) in addition to private access roads and a live highway have been influential factors to the design and construction of the project. It has been necessary to ensure continuity of business operations within the Port area through maintaining access to the businesses adjacent to the site throughout construction. 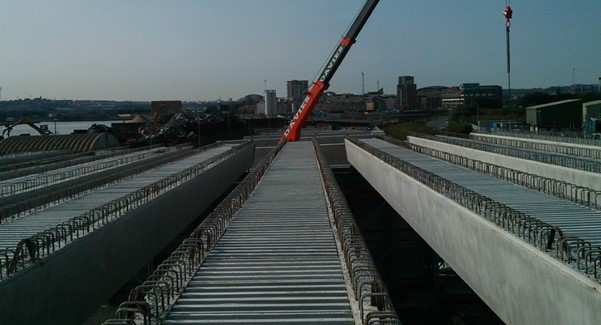 Inset: A view of the viaduct in construction.

"Having spent some time working on the project in the design office, I then spent approximately 6 months on site as part of Capita’s Certification of the project. On site I worked under the guidance of the Designers Site Representative. Essentially, the role of the Designer’s site representative was one of compliance and involved observation, checking and recording the construction of the works to ensure it complies with the Engineers Design and specification. For example tasks undertaken included daily monitor and record keeping, raising non-conformance records, checking material specification. In addition, gaining experience on site of construction methods, and observing construction sequences allowed me to further my understanding of how design proposals are constructed. I also learnt about the constraints and challenges encountered on site and ways in which these can be overcome. 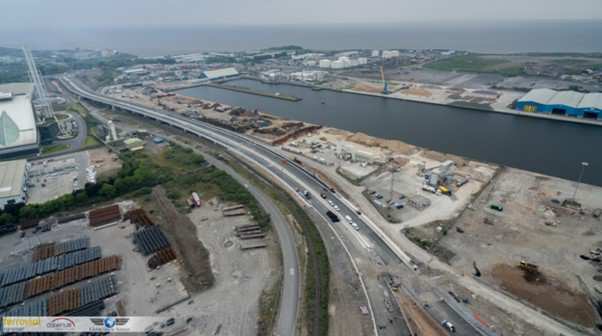 Inset: Aerial photograph taken of the site during construction.

"The Eastern Bay Link project also provided me with an opportunity to visit a local high school where along with a colleague, we were able to mentor a group of pupils through a design process (designing and constructing chairs and benches from donated wooden pallets, as part of the scheme). As part of this, we lead sessions on understanding the brief, calculation of materials required to meet the design requirements, option assessment and production of a final design. Following this, we assisted pupils in creating a 3D model of their proposals (in a way which would allow them to further develop their ideas in the future). Pupils were then able to construct the chairs and benches through assistance provided from colleagues based on site.

"Overall, my involvement with the EBL project has been very beneficial and informative. I have benefited greatly from experiencing the practicalities of constructing a design project and hope to be able to apply the knowledge I have gained to my future work".